When Robin saw a picture of Maxi Priest visiting a friends house in Jamaica he joked – “What a great place for a video shoot”. With the restrictions of lockdown meant filming together was impossible, Robin’s idea was brought to life with some clever ‘digital conjouring’ by video director Ben Milner (Brian May, Bastille, Disclosure and Rudimental). The retro grooves and blues funk treatment of ‘Are We Just People’ was chosen to shoot the video around.
Whilst Maxi Priest pours his heart out reflected in a beautiful pond at a summer house in Jamaica, his collaborators Robin Trower and Livingstone Brown appear reflected in the still calm water.
The video premiered on Youtube on 7th April and fans have been quick to praise the song. “The unmistakable Trower touch just gives the goosebumps”.

Scottish Daily Express:
“Three contrasting bedfellows combine to deliver an impressive blues-soul-funk album. Robin Trower was Procol Harum’s guitarist before solo success, Maxi Priest is a reggae vocalist with several chart hits, and Livingstone Brown is a multi-instrumentalist and producer who has worked with the likes of Ed Sheeran, Tina Turner and Kylie Minogue. A chance meeting brought them together, and the collaboration shines. The title track, On Fire Like Zsa Zsa and Sunrise Revolution are the best of a surprising success.” David Esson

Daily Mirror:
Reggae star Maxi Priest teams up with Procol Harum guitar legend Robin Trower in Livingstone Brown’s studio. The result is a subtle, beautiful blend of bluesy rock and soulful choruses. The slow groove of the title track is a taster for the classy funk and tender treats that follow.

Music-News:
“From the very start there is a soulful groove with the title track kicking off with some gorgeous strings, a gentle funk to the song’s groove and Priest’s beautifully sweet vocals. Trower’s wahwah lines are subtle and the song grabs you right from the off. It continues with ‘Are We Just People’ which has the feel of a ‘Superfly’ era Curtis Mayfield: emotional, gentle and buoyed up by deliciously produced strings. In fact, the whole album has the essential elements of classic era soul – picking up a bit of Marvin Gaye here or Phillysoul there – but it stands brilliantly in the modern day and I really can’t remember an album I enjoyed listening to as much in ages.

My personal favourite track is ‘Walking Wounded’ with a great vocal from Maxi Priest. The number is harrowing and dark, the strings just bringing the mood lower and lower and Trower delivering an absolutely agonizing solo. Hard to listen to but absolutely wonderful too. This should be on everyone’s player this year – it is a simply fabulous recording.”  Andy Snipper 5/5

Devilsgate Media:
“Nine-tracks of blissed-out, soulful music that whisks the listener away to a place where everything is alright, alright, alright. In places, it’s Marvin Gaye, Curtis Mayfield, or Bobby Womack performing with a bad-ass guitarist alongside them. You could even trick someone into believing that the opening moments of the lush title track feature Paul Rodgers on vocals. The guitar work from Trower is gorgeous, a wonderful exercise in restraint that every budding guitarist should be made to study. His playing is warm and rich, and when the wah-wah starts to cry (‘Are We Just People’), it’s truly sublime. Often dictated by Livingstone Brown’s sweet bass licks (‘On Fire Like Zsa Zsa’ should have bass merchants purring with delight), the pace of the album is so laidback that it glides rather than walks. After a few spins of moments such as the aforementioned ‘Are We Just People’, ‘Walking Wounded’ (just shading it as the standout track of the nine featured), the atmospheric horns on ‘Hands To The Sky’ (which comes complete with a lyrical tip-of-the-hat to Marvin Gaye), the beautiful string arrangements on ‘Bring It All Back To You’, and the throbbing, pulsing feel of ‘Good Day’, the listener should be cured of all that ails them.

A beautiful, harmonious album that is just what the Dr. ordered to help navigate these uncertain waters.”

Rock and Blues Muse:
“The album is a brilliant mix of contemporary blues and R&B with hints of rock, showcasing Priest’s soulful, silky vocals, Trower’s emotive guitar playing, and Livingstone’s ‘Midas touch’ on production. The musicianship is superb, as are the nine tracks. United State of Mind hits on all cylinders—songwriting, vocals, musicianship and production. Trower, Priest and Brown have captured some kind of magic. I hope they will continue on their musical journey together and release more albums. Highly recommended. Martine Ehrenclou

Raw Ramp:
The title track is a jazzy blues / funky groove number that offers oodles of internalized hoodoo in its soul… to make all the frazzled mulligrubs you probably collected over this madcap year disappear. This is a decorous and dignified album of graciously exquisite sounds presented by three superlative talents. The songs will steady your nerves and settle your jitters. Pure velvet harmony… Neil Mach

Red Guitar Music:
“Livingstone Brown is the glue that holds USM together utilising his bass and keyboard skills alongside his duties as the producer on as soulful a record as you’re likely to hear this year.
Robin Trower’s effortless, languid playing is an object lesson in less-is-more. Guitarists who feel the need to play a million notes a second would do well to check out Trower whose unhurried approach (occasionally you’re almost wondering when the next note will arrive) perfectly fits in with the feel the trio are aiming for. It’s far from a one-man show though as all three members of USM pull their weight and then some; Priest sounds great, Brown’s bass playing is tight as a drum and the horn and string arrangements add to the songs rather than distract from them. Fans of classic 70s soul and blues acts will find much to enjoy here, so my advice is crack open a bottle, light a candle, dim the lights and go with the flow.”

We Bleed Music Media:
“This album and group came together through mutual respect for each other’s talents, and they have not only crafted here an incredible piece of work but an album that is destined to be a classic.”

Geoff Wilbur Music:
“This is a smooth, relaxed R&B album with good, old-fashioned, big, rich, lush production, but still very song and artist-focused, able to appeal to a broad musical audience. So put the headphones on, sit back, relax, and let your ears enjoy.”

Producer, arranger, writer and all round mastermind of ‘United State of Mind’ talks his favourite stand -out songs of his collaborations with Robin Trower and Maxi Priest as the album is released on CD.

“This should be on everyone’s player this year – it is a simply a fabulous recording.” ANDY SNIPPER MUSIC NEWS 5/5

“United State of Mind hits on all cylinders—songwriting, vocals, musicianship and production. Trower, Priest and Brown have captured some kind of magic. I hope they will continue on their musical journey together and release more albums. Highly recommended.” Rock and Blues Muse.com

“This is a decorous and dignified album of graciously exquisite sounds presented by three superlative talents. The songs will steady your nerves and settle your jitters. Pure velvet harmony…” Neil Mach Raw Ramp Magazine 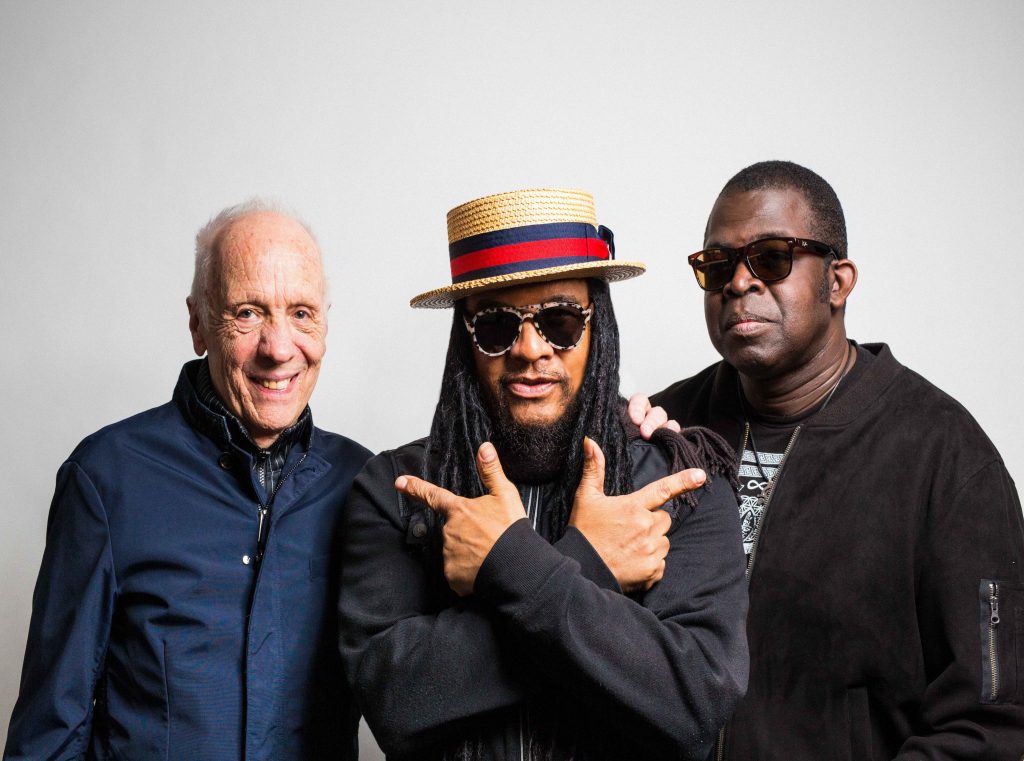 Three very different UK music legends: Robin Trower, Maxi Priest and Livingstone Brown, have come together to create the United State of Mind, and their self-titled album is released on Manhaton Records on CD and Vinyl on 5 March 2021. Three distinctive, trademark sounds and styles have dovetailed and fused together to create an album that is compelling, soulful and essential.

A pioneer in his genre, Maxi Priest is an iconic British reggae vocalist, with Jamaican heritage, best known for creating that potent blend called reggae fusion. Maxi has just been nominated for a Grammy for Best Reggae Album for ‘It All Comes Back To Love’.

Virtuoso rock guitarist Robin Trower found fame with Procul Harum, then went on to lead his very own power trio The Robin Trower Band. His album ‘Bridge Of Sighs’ has sold millions of copies worldwide.

Livingstone Brown is a talented producer/mix engineer and musician. As a session and touring musician during the 80s and 90s, Livingstone worked, separately, with both Robin Trower and Maxi Priest. He’s also worked with artists such as Ed Sheeran, The Waterboys, Tina Turner, Bryan Ferry, Kylie Minogue, De La Soul, ABC and Bill Withers.

What brought this remarkable trio together was a chance meeting at Livingstone Brown’s studio in Brixton.  “When Robin first met Maxi”, Livingstone said, “I thought this cannot end well. Wow, this record is proof I was so wrong!”

Maxi Priest puts it this way: “Three different minds coming together trying to create a unification that we can give as a gift to the world. We wanted to come together to do something positive. I’m overwhelmed and proud of this album. It’s all live instrumentation: fully organic music. This album is for music lovers: all genres.”

“USM was one of the first pieces of music that I came up with for Maxi,” reflects Robin Trower, “As soon as he heard it, Maxi had the lyric idea and everything started to fall into place from there. Working on the album with Livi and Maxi was a complete joy from beginning to end.”

‘United State of Mind’ is rich in commercial appeal and so smooth that it’s virtually frictionless. The third track on the album, ‘Are We Just People’, has just been included on the soundtrack of a new film, just released, about Muhammad Ali, called ‘Ali’s Comeback’. Like Ali did, United State Of Mind pack a punch.

Producer, songwriter, arranged and bass player Livingstone Brown took time to play through some of the songs on ‘United Site of Mind’ and explain how they were written and recorded.

“Love it – from start to finish” 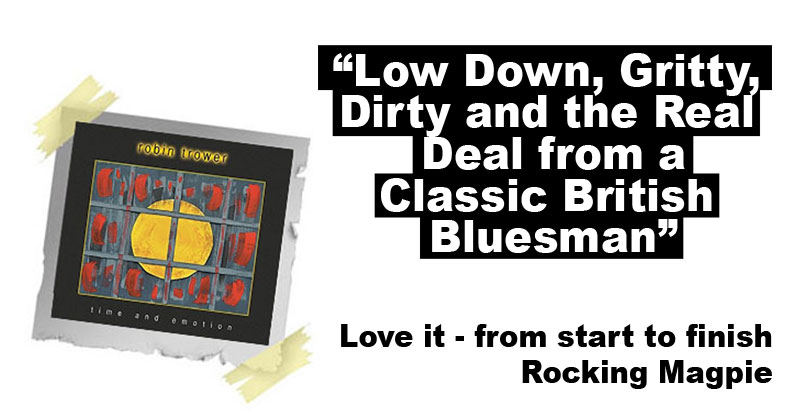 Robin’s new 2017 album ‘Time and Emotion’ is out now and shipping in the UK and Europe from Manhaton Records here. Official release date for Amazon, iTunes etc is August 4th.
Watch some of the highlights below: